(Above) As the first Innu woman elected band council chief of Pakua Shipu, Mary Mark (pictured) is proud of the progress made by the women in her community since the arrival of high-speed internet. PHOTO BY JOSHUA MCKINNON

“Just because we’re women, it doesn't mean we can't build homes, drive trucks, and shape the future of our community with our own hands and ideas.”

This is what comes to mind for band council leader Mary Mark as she looks back on the significant progress made by the Innu women of Pakua Shipu, an Indigenous village with a population of just over 200 people located in the vast, roadless region of Quebec’s Lower North Shore. As the first woman to be elected band council chief in 2006, she recalls that, barely 10 years ago, women in her community would rarely dare to speak publicly and voice their opinions -- an all too common experience shared by Indigenous women following centuries of colonization that has contributed to the devaluation of their traditional authority and community contribution.

But today, in Pakua Shipu, women are playing a leading role in their village’s economic development, especially through their art. Since TELUS high-speed internet arrived in the region in 2019, their businesses and learning opportunities have increased significantly.

It all started over a decade ago when Pakua Shipu was looking for a way to enable women to find their voice, and boost their entrepreneurial spirits. Crafting was a natural way for them to fill this space. Innu women’s centuries of legacy can be found in every pleat and fold of their traditional artwork, crafts and clothing. Together, the women worked hard renovating an old home in the village, transforming it into a commercial space that also stands as a symbol of their active participation in and development of the community. Today, around a dozen women from multiple generations meet there regularly to talk and create.

“Yes, we make moccasins, dreamcatchers, jewellery, and clothing, which we then sell,” says Mark.

But the women’s house and handicraft project is much more than just an economic venture.

“It’s also a way to ensure the continuity of our culture. My mother was an artisan, as was her mother, and her mother before that. We pass down the soul and history of the community from generation to generation, and since last year, we've been able to do this at a very high speed and eliminate borders,” Mark adds. 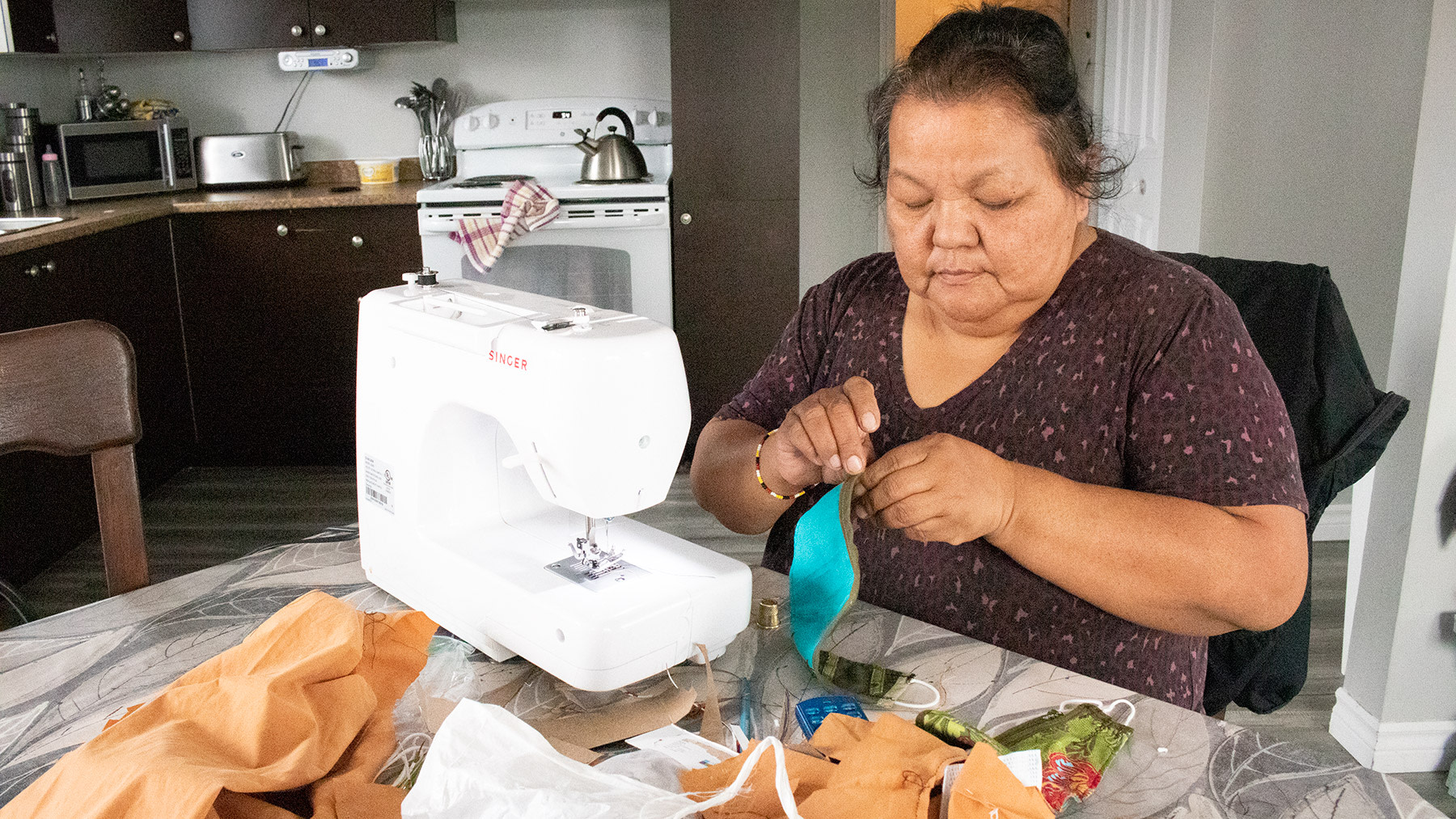 Artisans such as Marie-France Lalo (pictured) pass the soul and history of Pakua Shipu from one generation on to the next. Every fold and every stitch reflects centuries of cultural heritage. PHOTOGRAPHY BY JOSHUA MCKINNON

According to Benoit Sioui, executive assistant to the Innu Council of Pakua Shipu, crafting has become a leading force of economic vitality, as it provides the community with a stable revenue stream. With the ambition of opening a Shaputuan inn to welcome travellers by 2023, Sioui knows that Innu traditions and high-speed internet are essential to the project. Under his business plan, Innu women will play a key role bringing the vision to life by offering visitors Innu language courses and crafting workshops, such as moccasin pleating, a noted meticulous craft specific to the region where women use a needle to give delicate relief patterns to the leather.

“Before high-speed internet and cell phone service arrived, we wouldn’t have even been able to imagine having a website with animations and videos, or to safely send our guides farther afield on their tourist expeditions. Now everyone can see the women actively making crafts, or book a room, or buy handmade objects, all online,” he says. 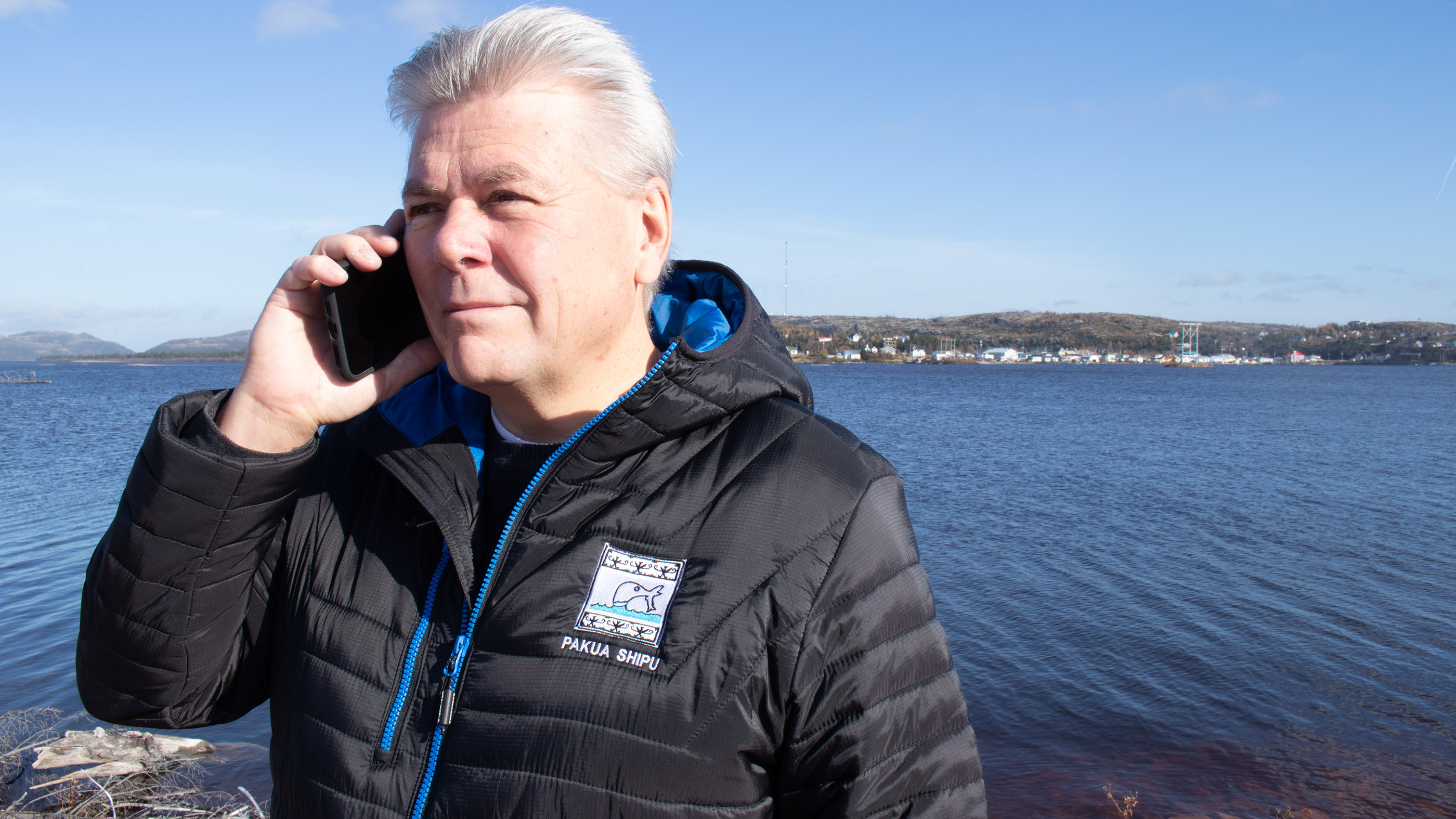 Benoit Sioui (pictured) hopes to open the Shaputuan inn by 2023, a dream that is inseparably intertwined with the richness of Innu traditions and the value of high-speed internet. PHOTOGRAPHY BY JOSHUA MCKINNON

While most Canadians may consider connectivity easy to come by, it was only in November 2019 that the Pakua Shipu community could rely on more than old-fashioned home phones or satellite technologies with limited speeds to communicate with the outside world. TELUS brought high-speed internet to the community last year, as part of an ambitious project that now ensures network service to people across the vast Lower North Shore region. To serve the region, which stretches across 400 kilometres and several communities, TELUS teams had to transport its heavy equipment by ship and helicopter, then travel in all-terrain vehicles to build and activate the network at sites that were not otherwise accessible. Through an ingenious combination of technologies, including the award-winning TELUS 4G LTE network, 10 of the region’s communities, including Pakua Shipu, are now connected to the rest of the world, and another four will be connected by 2021.

In a community with an unemployment rate hovering around 30 per cent, high-speed internet has become an essential tool for exporting Pakua Shipu’s unique culture to the rest of Quebec, Canada and, indeed, the world.

“We also need to deal with a particularly high cost of living, given Pakua Shipu’s isolation. Our supplies are delivered by boat or plane. Two litres of milk costs me six dollars at the grocery store,” says Sioui.

Critically, connectivity will also help preserve the wisdom and oral traditions of Innu women, especially that of the Elders. Many of these women travelled 250 kilometres by foot and canoe from their ancestral land, their Pakua Shipu, after their forced deportation to Unamen Shipu in 1961. They saw social problems grow in their community, but they had the courage to break the silence on past injustices and abuse. Today, they have reclaimed their land, traditions and place in their community.

“Pakua Shipu is a community that has arisen from oral traditions. The women are the guardians of the culture; mothers are the first teachers. And when our Elders leave us, it's like part of the library has burned down,” explains Sioui. “High-speed internet will allow us to share and pass on their stories and their art for many generations to come.”

According to Mary Mark, the main challenge for local women is education. Before today, they had to travel away from Pakua Shipu to pursue school. Mark herself left her community and holds a number of post-secondary degrees in special education, financial management, and child health intervention. But she did not always find life outside of Pakua Shipu easy.

“We missed our home when we were away. We felt far away from our people and from nature. Even though at 26, I was very mature and had family in the city with me, I sometimes felt disconnected from my roots,” she says. 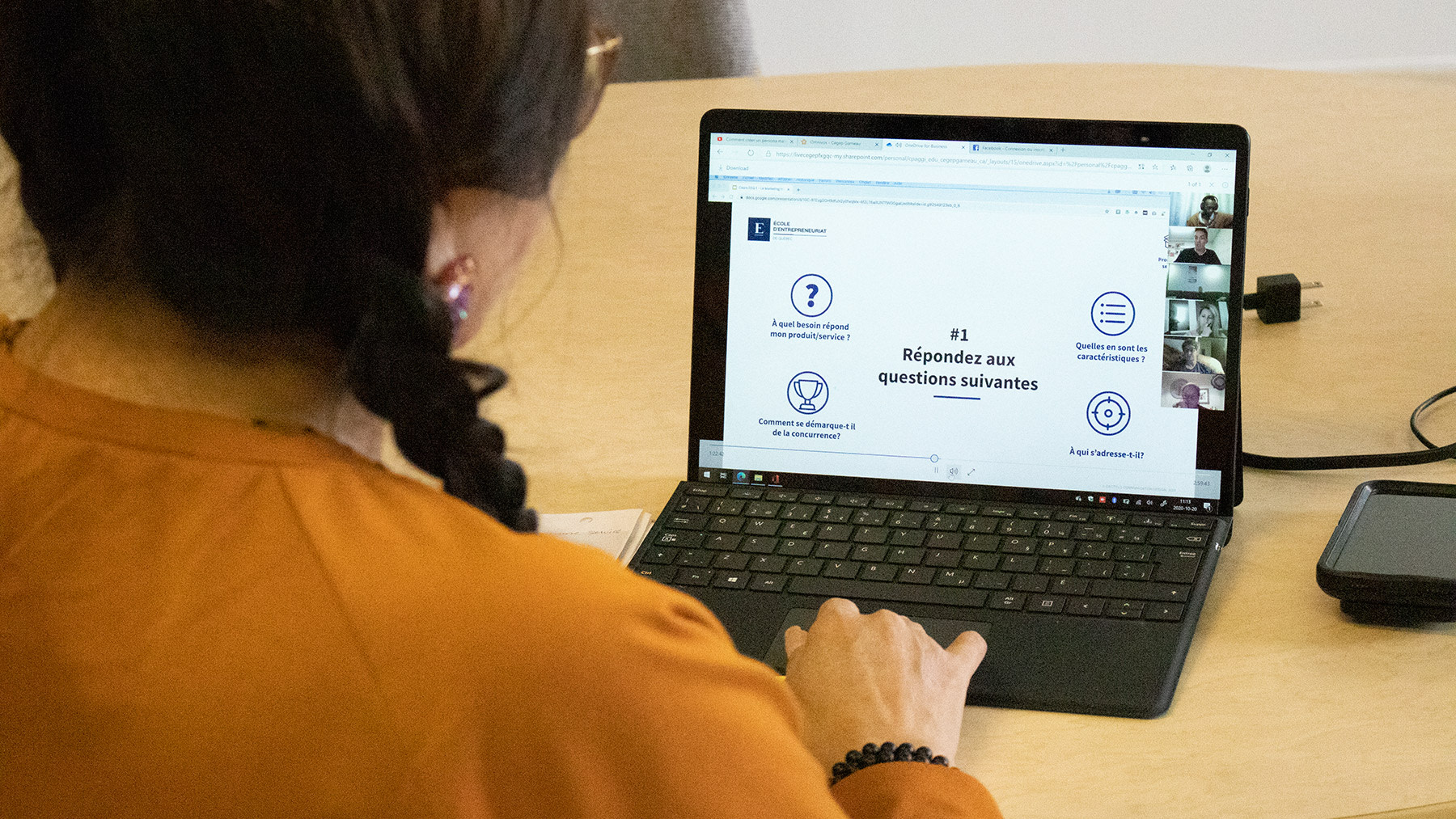 Three Pakua Shipu women have signed up for a driving course taught via videoconference. The new-found connectivity provides an opening to the world through which Innu women can continue their education and expand their knowledge. PHOTOGRAPHY BY JOSHUA MCKINNON

Connectivity offers a gateway to the world, making it possible for local women to seek further education and expand their knowledge base. The band council is already working on remote management training projects for the next generation. Together with the Unamen Shipu (La Romaine) reserve, the community is actively working on setting up a virtual education program for heavy machinery, along with driving classes offered through videoconferencing.

Three Innu women have so far raised their hand. By taking three hours of theory classes a week, remotely, they will eventually be able to earn their driving licence, pursue their training further in heavy machinery, and, eventually, participate in the economy through meaningful employment.

“Our women have courage. They are starting to learn professions that were traditionally reserved for men, and are using their past to prepare our young people for their future,” says Mark. “Cell phone service and high-speed internet have made it possible for them to raise their ambitions, providing a way to stay connected with the rest of the world, while keeping both feet firmly planted on the sandy, isolated shores of our very own and unique Pakua Shipu.”

A similar version was originally published in partnership with Chatelaine Quebec. 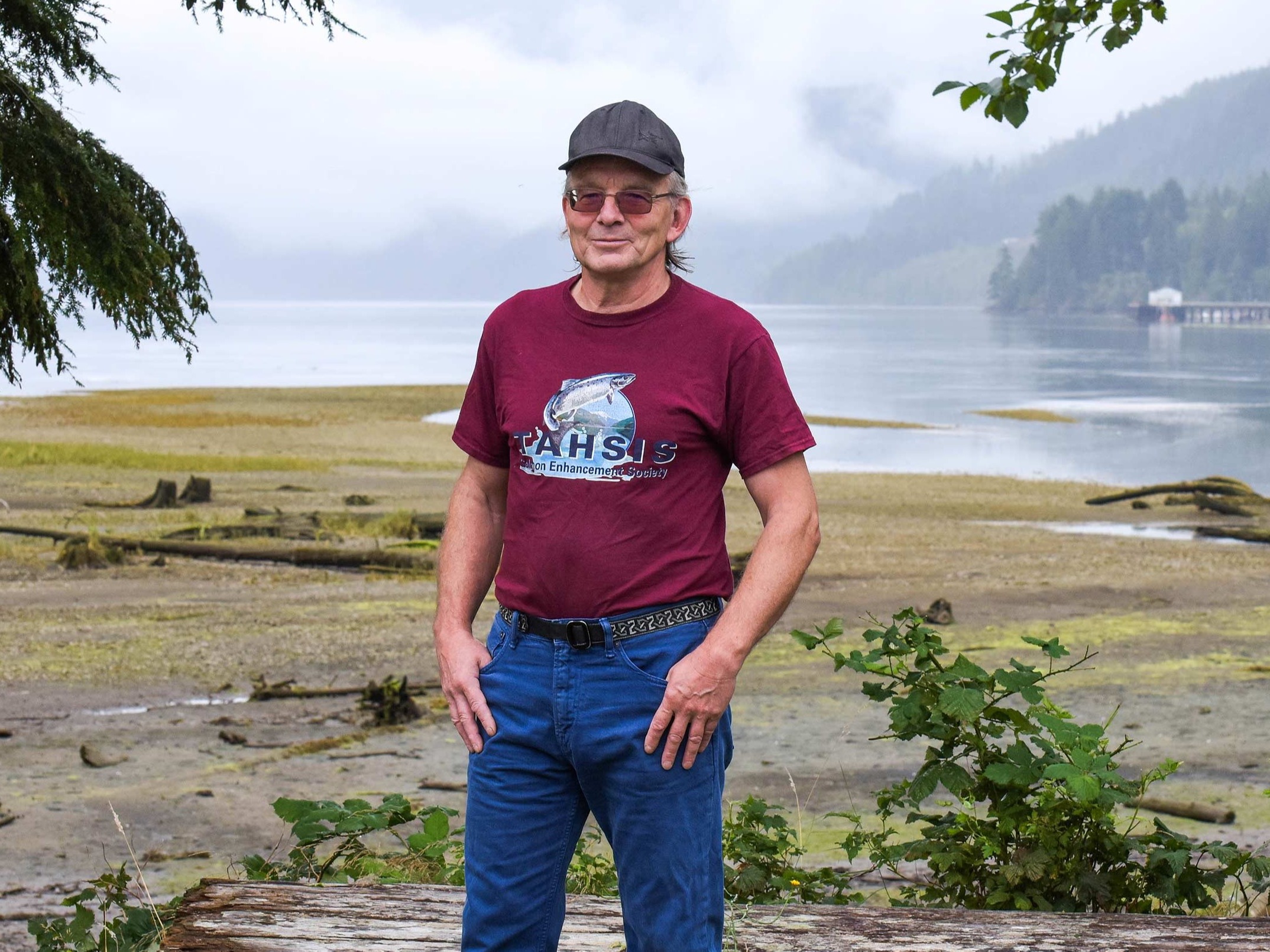