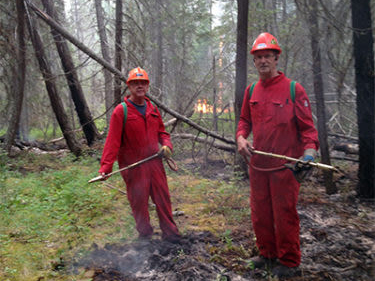 Helping those affected by the B.C. wildfires

A province-wide state of emergency was declared in British Columbia on July 7, after wildfires destroyed buildings and forced thousands of people from their homes. As more than 160 wildfires in B.C. rage on, TELUS team members are coming together to protect the communities they call home. Firefighters and emergency responders are working tirelessly on the front lines to battle the blazes that have forced 46,000 residents in five communities to evacuate their homes. There’s a special kind of work going on behind the scenes with several members of the TELUS family volunteering to keep their neighbours and communities safe.

Meet some of our TELUS heroes

Paul McCarthy, a TELUS Service Technician since 2012, is a proud volunteer and Deputy Fire Chief of the 150 Mile House Fire Department. A father of two, Paul is following in the footsteps of his dad, a founding member of the department. He began volunteering at the department when he was 16 years old and those years of experience have prepared him for the current crisis.

On July 7, Paul was en route to Bella Coola on the Central Coast of B.C. when he got the call about the first wildfire and quickly made his way back home. He was driving the last car to make it through the evacuation route and wasted no time getting to work. Sleeping on a concrete floor and running on little sleep, Paul has been coordinating and managing logistical operations – mobilizing more than 30 volunteer firefighters, creating incident action plans, coordinating which areas to send personnel to and assisting with briefings with the Cariboo Regional District, Office of the Fire Commissioner, RCMP and the Government of British Columbia’s Wildfire Management branch. And, when the volunteers need food and rest, Paul makes it happen – securing lodging and accommodations, and arranging meals.

“I’m a very, very small part of an incredible team and so privileged to be a part of this department,” says Paul. “Our motto is ‘always forward and continue on as a team.”

We’re also fortunate to have volunteers like Graham Smith and Rick Rhodes helping us on the ground. The best friends both retired from TELUS in 2009 after 30 years of service, but they’re not putting their feet up. In 2016, they returned as part-time Network Technicians and are also volunteer firefighters with the Tyee Lake Volunteer Fire Department, actively fighting the Wildwood fire near Williams Lake. A number of other team members are also helping to restore affected services, refuel generators, monitor alarms and much more.

Lending a hand in the Philippines