Tell me why... being Agile is so important to Product delivery

What does being Agile mean? It's a term that is often socialized in any modern tech organization, including TELUS Digital, but what does it truly mean? According to Oxford Languages, the official definition of being Agile is as follows:

Relating to or denoting a method of project management, used especially for software development, that is characterized by the division of tasks into short phases of work and frequent reassessment and adaptation of plans. "agile methods replace high-level design with frequent redesign"

In short, being Agile allows Product Owners and Product Managers, to push forward new digital features in smaller iterative stages. But how did software development become more Agile and what does this have to do with TELUS Digital?

First, we need to go back to the turn of the new millennium to see how technology was developed. Let me paint you a picture of the early 00’s: the Backstreet Boys are going strong with their fifth international tour & Apple just released a little something called the iPod. Technology at this time was developed, for the most part, using the classic waterfall methodology that involves pushing a completed feature all at once without iterative stages. This was a classic project management tactic used to help build complex projects, likely used in construction, and had worked for decades. It became the natural next step for building digital features but there were underlying problems with this method. Although Waterfall makes sense when there is a clear order, like with the construction of large buildings, technology is different -  always fluid and changing. The reality is, requirement gathering in the discovery stage can only go so far in building a completely successful digital product, as Waterfall mostly assumes the early prototype is also the final version that will hold true all the way to the end.

Was technology and the development around it doomed to fail? Not quite. Enter the twelve principles behind the Agile Manifesto, created in February 2001 to identify improvements in the monotonous process of software development at the time.

The following principles are particularly relevant to this situation: Satisfy Customers Through, Early & Continuous Delivery, Deliver Value Frequently, Simplicity is Essential, and Regularly Reflect and Adjust Your Way of Work to Boost Effectiveness. Sounds similar to TELUS Digital principles, doesn’t it? Since its inception, Agile techniques have become commonplace for building products in modern tech corporations with over 70% of adopting Agile practices. One of the most important techniques of Agile is an MVP. Not the Most Valuable Player, but a Minimum Viable Product. An MVP is essentially a low-effort experiment of what the final product will ultimately be. Releasing an MVP instead of something that's feature-complete, allows for instantaneous learnings with minimum effort and should inform the path forward for future feature iterations.

So now that you know about Agile, let's see it in practice with a feature that was recently launched on the My TELUS app for our Business customers. The Virtual Assistant (or Chatbot) has been a staple at TELUS Digital in serving customers with an alternative service to smartly assist with their problems and needs. It is one of the fastest growing self-serve levers for our SMB base, growing 34% QoQ with tens of thousands of live contacts avoided via the virtual assistant. Unfortunately, our Business customers that used the My TELUS App did not have access to a Virtual Assistant.

While the Business Web Virtual Assistant provided access to sales agents, it also required a survey to be completed every time prior to connecting with the VA which created some friction for the customer. Alternatively, the Consumer chatbot did not have this survey, which reduced friction for the Customer, but this removed any capabilities of connecting to a sales agent. We ultimately implemented the web version of the SMB Virtual assistant on the App after reviewing potential sales benefits. See below for the user flow. 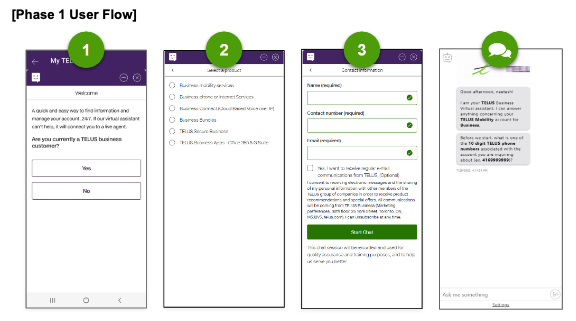 We rolled out our MVP to around 5% with a very simple implementation where customers would be navigated to a web page to complete the pre-chat survey to distill learnings with minimal effort. Based on the customer response in the survey, they would ultimately navigate to a virtual assistant for self-serve needs or a sales agent, similar to the current Web experience.

What happened next? Well, to be frank, the MVP was not successful. See below for the stats:

Customers had trouble getting through the pre-chat survey on their mobile devices and almost no customers navigated to sales opportunities. All the customer really wanted was self-serve assistance. It made no sense to roll this feature across the entire customer base currently so we iterated based on the data. 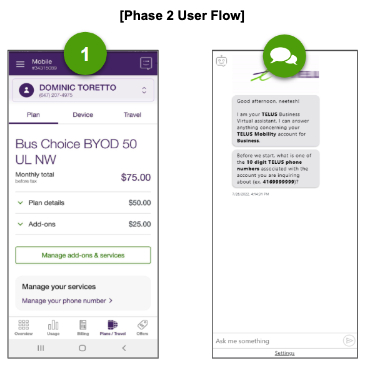 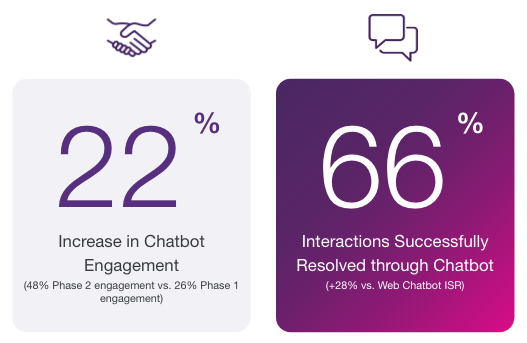 We saw increased engagement and more customers resolving their issues via the Virtual Assistant, ultimately preventing unnecessary call volume. By removing the friction of the survey and focusing on the self-serve potential of the Virtual Assistant, this iteration allowed us to build a compelling feature to serve our customers best instead of spending the effort to force our initial prototype on the entire population. We also distilled learnings for the future app roadmap, to serve sales opportunities to our App customers separately, instead of through the pre-chat survey.

What is there to take away from this? Although Agile techniques that are aligned with the Agile Manifesto are difficult to execute perfectly in any large corporation, there are key elements of Agile that can be applied to launching any digital feature. Too often features are launched in "stages" but no iteration or data evaluation is completed between subsequent phases. That's not being Agile and not an effective way to serve our customers to the best of our ability.

By Focusing on our SMB customer base first by Valuing data over opinions, we delivered an effective feature through Agile product development. I encourage all product leaders to use data to embrace failure in the first phases of development to ensure an effective product is available for all our customers in its final version.

Dylan Cowley
Senior Product Owner
Dylan Cowley is a Product Owner for the My TELUS App on the Digital B2B team. He is a big fan of data, product management, and dad jokes.

Chris Peressotti
Agile Coach
Chris Peressotti is the Agile Coach for TELUS Digital's B2B team. He cannot believe his luck to be in a role that draws equally from his experience in engineering, project management, and improv comedy.

Hackathon: Helping customers get what they want out of their TV packag...

10 very annoying things about being a developer