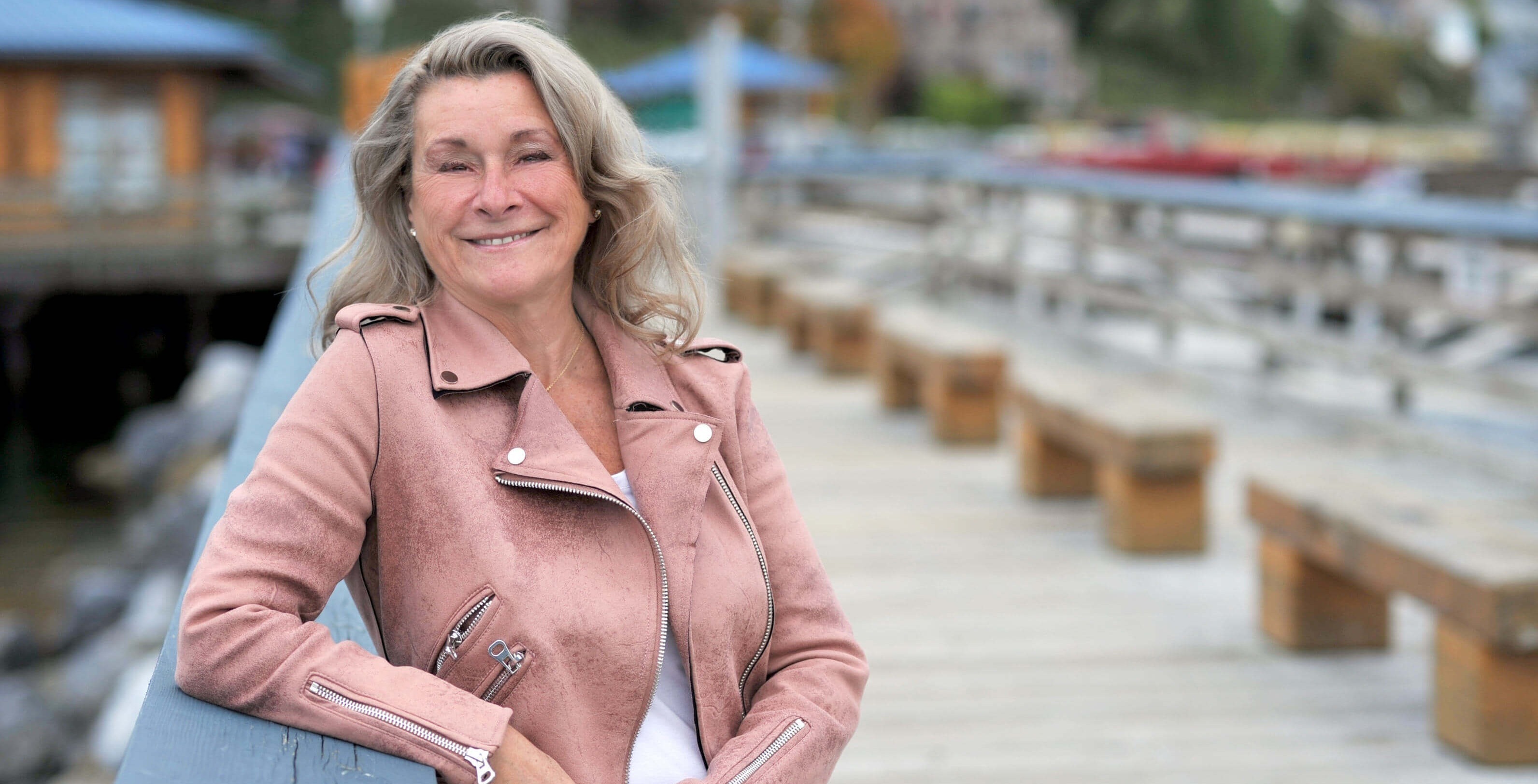 (Above) Gibsons, Sechelt and the surrounding rural neighbourhoods are experiencing a mini boom in home-based businesses enabled by a powerful fibre optic network that makes it possible for people to live and work where they want, while enjoying the same connectivity benefits of a large city.

British Columbia’s Sunshine Coast gave Joanna Piros everything she needed to downsize from life in the city -- a 280-degree view from her home office in the small town of Gibsons, just 50-minute ferry trip to Vancouver; and, best of all, the opportunity to start her own company and work on her own schedule. Rather than being tied to a desk in the city, she now has the power to have a conference call with a client, while out for a walk, picking blackberries.

“That’s one of the beauties of living here. It’s your own business so you totally call your own shots,” said Piros, head of Counterpoint Communications, which does communications consulting and training via video and platforms like Skype and Facetime.

That Gibsons is one of 125 Telus PureFibre communities solidified Piros’ decision to move. Critically, the fibre network provides communities with enough bandwidth and capacity as the world moves into the 5G era, making it possible for people to live and work where they want, while enjoying the same connectivity benefits of a large city.

“The fibre optic up here is a huge selling point. I can have clients in the city without having to hop on the ferry,” she said.

A boom in home-based businesses

And she is not alone. The arrival of fibre to Gibsons and surrounding communities on the Sunshine Coast has helped to spark a mini boom in home-based businesspeople, including contractors, tech workers, media marketers and film industry professionals -- many of whom have fled traditional jobs in urban centres.

According to Statistics Canada, more than 30 per cent of those working in Gibsons, Sechelt and neighbouring communities either work at home or have no fixed workplace. The average for B.C. is just 19 per cent.

“It’s the freedom to make choices that work for me,” said Tzaddi Gordon, a home-based graphic designer and illustrator in Roberts Creek, a rural community between Sechelt and Gibsons. “I don’t have to be in some sort of corporate box from nine to five.”

Gibsons appears to be leading the trend. Telus completed its fibre build in the town in 2016. A year later, Gibsons issued more than 180 licenses to new businesses – a big chunk of those for home-based services. That’s no small feat for a town with a population of less than 5,000. Dave Newman, director of infrastructure services, said the proximity to Vancouver, cheaper house prices and the fibre connection have combined to raise the Sunshine Coast’s profile as a place to start or grow a business.

Indeed, Small Business B.C., which recently awarded Gibsons the small community category Open for Business award, lauded the town for its significant investment in projects such a major hotel and conference centre, while a “growing tech community is attracted by premium web access (fibre optic), quality of life and relative affordability.”

“One key point is the high-speed fibre optic has made it possible for a lot of businesses to be viable to be working at home without a required presence in a larger city,” said Newman. “I can tell there’s a different vibe in town now. Just in the last five years,  we’re seeing more young people in town. That’s part of their lifestyle, to be able to have fast access to the internet. That seems to be an important part of how they live.”

Gordon only had access to an ADSL cable when she moved to Roberts Creek in 2006. At the time, it didn’t matter because video conferencing hadn’t taken off. But now, she said, “there’s a real expectation when you’re consulting that you can hop on a video call.”

Piros agreed. As part of her work coaching NHL draft picks, she sends annotated videos to her clients with suggestions for improvement.

“Doing that volume of video, uploading and downloading or having screen coaching in real time, it wouldn’t work if it was a crappy connection,” she said.

A growing network of telecommuters and digital nomads

Local governments are taking notice. The Sunshine Coast Regional Economic Development Organization (SCREDO) has expanded its FUSE work hub in Gibsons and will open new working spaces in Sechelt and Pender Harbour for what it calls a growing network of “telecommuters, digital nomads and self-employed contractors.” The hubs provide a 24/7 meeting space with lightning-fast internet and networking opportunities for people who work from home, live on the Coast part-time, or are in town for business or vacation.

“Having the proximity to Vancouver enables a dual work environment. You can work from home for a couple of weeks and pop over to the city without a huge outlay in time and effort,” he said. “We believe these services will be valued.”

The FUSE hubs have proven essential to Julia Magnuson-Ford, president and founder of Tinyfrog Strategies, which provides online fundraising workshops to small non-profits and boards. Magnuson-Ford, who operates between her home base in Gibsons and Jamaica, relies on the hubs when she’s on the Coast.

“It was important to have a business that could go with me as I travelled,” she said. “The Coast is absolutely phenomenal for that opportunity.”

A move to the Sunshine Coast in 2016 was “healing” for Jessica Marola-Hugh, founder of Catalyst Marketing. She and her husband had felt disconnected in the city, she said, but found a fresh start after buying an 8.5-acre property in Sechelt where they raise chickens and grow their own food. That Sechelt has been connected to PureFibre since 2014 was a big factor in the decisions, allowing her to live the life she wants, while keeping her business as a graphic, web, and advertising consultant operating. Clients, she said, are just a video chat away.

“I really believe in incorporating my lifestyle into my work,” said Marola-Hugh. “It’s a very different kind of working landscape, I’d say, from my parents’ generation where they commuted to work every day to some office. There’s a sense of community here, a sense of connection, and the fact that I can work from anywhere.”