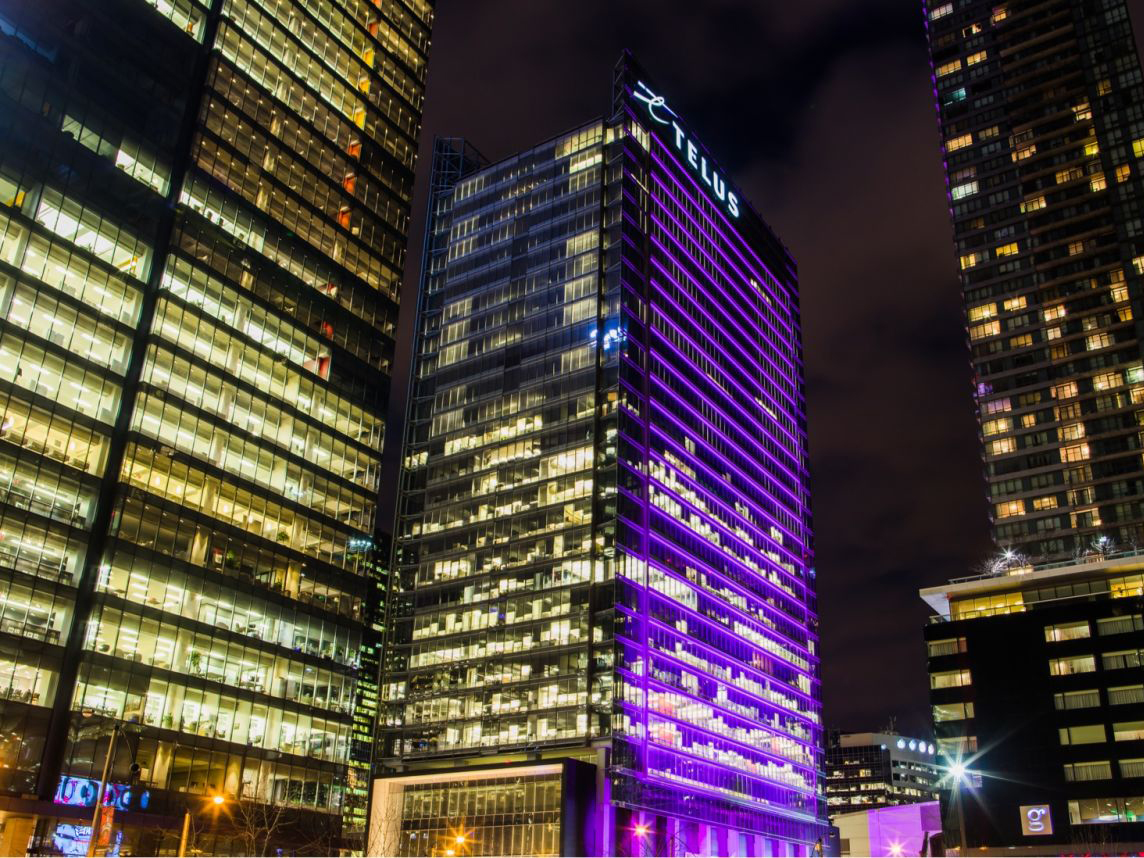 Shining a light on pancreatic cancer

Seeing TELUS Harbour in downtown Toronto bathed in soft purple light on a crisp February night is a treasured memory shared by Corinne Kalles and her children, Jana, Jake and Ali Goodbaum.

“It was so beautiful,” says Corinne of the gesture, a silent tribute to her husband, and Jana, Jake and Ali’s dad, Joe Goodbaum. “TELUS meant so much to Joey.”

The feeling is mutual.

Joe was a much-loved and highly respected senior vice president at TELUS, where he worked for 17 years until his death in February of 2016, two months after he was diagnosed with pancreatic cancer. He was 57.

It’s somewhat serendipitous that purple, a color emblematic of the TELUS brand, is also the global symbol for pancreatic cancer awareness. The decision to light up TELUS Harbour, as well as TELUS Garden in Vancouver marked an unprecedented period of mourning for the company and its 40,000-plus team members, many of whom were deeply impacted by his death. More than two years later, the mention of his name invariably sparks memories of a workplace made brighter by his warmth, laughter and passion for life. He always took the time to catch up with his colleagues, asking about their children and spouses by name – a remarkable feat given that he led a team of nearly 4,000 people across the country.

“Our dad was warm, kind and naturally made every person he spoke to feel special,” says Joe’s daughter Ali of her father’s gift of connection.

His optimism didn’t waver even as he underwent treatment for this particularly deadly form of cancer (which has a mortality rate of 93 per cent).

“My dad lived his life by one saying, ‘Just happy to be here’,” his son Jake recalls. “Even when he was in the hospital getting procedure after procedure, he would tell us, the nurses and the doctors, ‘I’m just happy to be here’ – that’s the type of person my dad was.”

That positive spirit set the tone for TELUS team members in paying tribute to their dear friend. In the days following his death, the website belonging to Pancreatic Cancer Canada Foundation, to which the Goodbaum family had dedicated their support during Joe’s illness, crashed as a result of TELUS employees donating money in his name.

It was the first step in what’s become an important relationship between TELUS and the Toronto-based non-profit, whose mission it is to vastly improve survival rates for pancreatic cancer patients through research support and public awareness.

More than two years on, TELUS has formalized the partnership through the creation of an ambitious annual public awareness and fundraising campaign held throughout January across TELUS and Koodo stores and dealerships across Canada. Between the TELUS campaign, a TELUS Community Investment match, and additional charitable initiatives and contributions from Joe’s friends and family, nearly $500,000 has been raised in Joe’s memory to date.

Pancreatic cancer is considered “the world’s toughest cancer” due to its low survival rates and limited ability by doctors to detect the cancer early on. Despite contributing to the most cancer deaths in Canada, it receives less than two percent of overall cancer funding in the country.

“TELUS showed such emotion and passion to honor Joe right from the start,” she says. “They are looking at a really difficult problem and they’re saying, ‘We can do something about this.’”

In addition to the funds raised, the efforts to honour Joe’s legacy has increased the foundation’s visibility in the charitable community – helping it attract even more much-needed funds from the likes of the Terry Fox Foundation, which has earmarked $5 million for pancreatic cancer research, and the Cancer Research Society, which has committed an additional $2 million.

Mark Bridgman, senior vice president of TELUS Retail, has also become an active member of the foundation’s board, along with other influential peers, such as Mickey Jackman, a former TELUS executive and now head of strategy and operations for Google Canada.

“These are dramatic changes,” says Capobianco. “This has more than doubled the amount we are able to put towards research and greatly increased the number of people who’ve heard about pancreatic cancer.”

TELUS’ promise to “Give where we live” was particularly meaningful to her husband, says Joe’s wife, Corinne. A noted philanthropist in Toronto, the city where he was born and spent his life, Joe gave his time and expertise to a variety of organizations, including Wellspring, supporting people living with cancer; Project Give Back, building empathy and community-mindedness in children; Mazon Canada, raising awareness around poverty and hunger; and Temple Emanu-El, nurturing Jewish life and social justice.

“The best way to describe Joey was the Yiddish word “mensch,” meaning a person of integrity. Joey was the most kind-hearted, giving, caring, passionate and authentic person I have ever known,” says Corinne.

Joe’s values are now shared with his children, all of whom have actively committed to raising funds for Pancreatic Cancer Canada. For the past two years, the family has led fundraising for the annual OneWalk to Conquer Cancer, benefiting the Princess Margaret Cancer Centre in Toronto. Jake has also collaborated with TELUS to raise money for Pancreatic Cancer Canada through the annual TELUS Marketing Golf Tournament in honour of Joe Goodbaum, while Ali, a first-year medical student, successfully spearheaded a fundraising initiative with her classmates at the University of Ottawa.

“Our dad taught us to give back passionately to the causes we care about, so this is a no-brainer for us, says Joe’s daughter Jana. “We know that our dad would be so proud of the work that our family and the TELUS family have done so far, and we are going to keep up our fight against pancreatic cancer in his honour until no more families have to go through what we went through.” 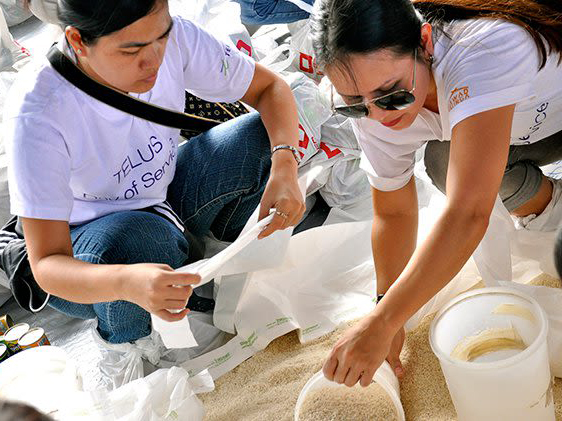 Lending a hand in the Philippines