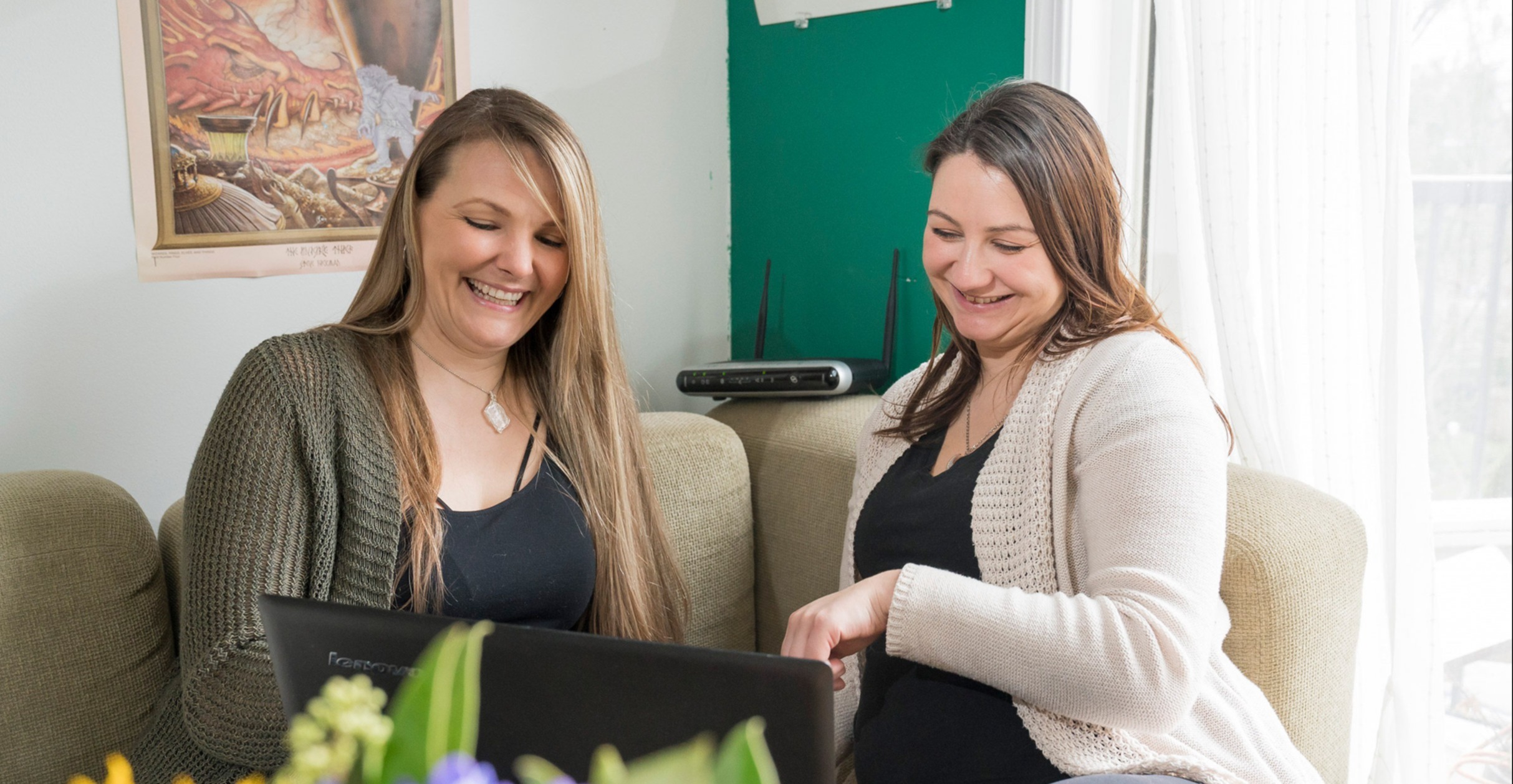 A new, innovative program enables tens of thousands of low-income families to access fast and reliable internet connection at home, which means a stronger, healthier future for kids growing up in an all-connected world.

Learn more about how TELUS Internet for Good is helping provide digital equality for low-income families.

For Reava Connolly, the green lights on the Wi-Fi modem resting on a narrow counter in her Vancouver apartment mean much more than a gateway to the internet. They are a symbol of what it means to be truly connected.

It’s been more than four years since Connolly, 43, removed herself from a devastating cycle of homelessness and addiction. This new chapter of her life has seen her move to the city and find housing and healing amid a supportive network of friends and family members.

Bringing her three sons, now 16, 18 and 24 years, back into her life was always the priority as she worked to rebuild the world around her, step by step. Opening a bank account. Paying the rent. Buying groceries. “Normal life stuff,” she says.

Her kids were excited to be reunited with their mom. But spending time at her apartment was a struggle for the younger two boys.

Living on a disability income meant high-speed internet was a luxury Connolly could not afford. She wasn’t bothered by the circumstances, but her boys are typical teenagers — keen gamers and active on social media. Critically, they also rely on various websites and digital platforms to help with school.

It was a challenge to get them to visit when the nearest internet was at the public library and a night in with Netflix was replaced by old DVDs.

“For them it was like living in the dark ages. They’d go from having everything at their dad’s house to having nothing at mom’s,” Connolly says.

A solution to Connolly’s concerns appeared unexpectedly in the form of a letter introducing an innovative program from TELUS.

The TELUS Internet for Good™ program was first introduced in 2016, in collaboration with provincial governments and not-for-profit partners in British Columbia and Alberta. It offers low-income, single-parent households in both provinces up to 25 Mbps download speeds at a cost of $9.95 per month. Critically, families can also purchase low-cost refurbished laptops and tap into important educational programs such as TELUS Wise®, as well as free digital literacy resources to help them make the most of their network access.

The program has since grown across the country with TELUS joining in the federal government’s Connecting Families Initiative in 2018 to enable hundreds of thousands more Canadians to receive low-cost Internet at home.

Across Canada, 42 per cent of low-income families lack affordable access to the internet, which puts kids at risk of falling behind in school. According to ACORN Canada, home internet connectivity accounts for a six to eight per cent increase in high school graduation rates.

Alberta Community and Social Services Minister Irfan Sabir says that when it comes to bridging the digital divide, the province welcomes the help from private-sector partners like TELUS.

“Poverty is a complex social issue and collaborative, innovative partnerships are needed to address that,” Sabir says. “Everyone from individuals, families, communities, private and non-profit organizations to government need to come together to address poverty and ensure a brighter future for children and families.”

Jessica Taylor was among the first to sign up for the program after learning about its existence from Connolly, her neighbour in Vancouver and close friend.

The 34-year-old Vancouver resident is mom to six-year-old daughter Dylan and baby Logan, born in May 2018. She is a chef by trade, with Red Seal certification in culinary arts, but depression and anxiety have made it difficult to maintain stable employment.

“It’s tough,” Taylor says of the monthly challenge of making ends meet. “We get by, but definitely living on a fixed income, there are tons of sacrifices.”

Taylor recognizes that ensuring her kids have access to the internet is nearly as critical as feeding them a balanced meal. Dylan’s teachers already send the little girl home with suggestions on educational apps to download, as well as online learning tools and games to use. That digital connection will only become more pressing as she and her baby brother grow up.

“I think it’s important that we have programs like this so that the average person can be just as connected as the person who can afford it,” she says. “All any parent wants is for their children to have the best lives that they can build for themselves and the Internet for Good program helps them do that.

For Connolly, the Internet for Good program is one more piece in the healthy life she continues to build for herself and her boys. She didn’t expect a home internet connection to have such an impact, but admits she’s become enamored by the access it gives her to books, news, educational tools and employment. She recently landed a job at a recovery centre for women -- a role she quickly applied for over the internet after it was posted.

She also regularly checks into online chat groups to talk and share with others who struggle with addiction.

“When you are in your addiction, you cut everyone out and you feel so alone,” Connolly says. “I’ve now learned that connection is everything. So, even if I don’t want to talk to someone, I can go on Facebook and see someone’s uplifting post and I think, yeah, I can do this.”

Nothing, though, compares to the time she shares with her boys, whether they are with her at home playing a video game on the laptop or chatting over FaceTime from their dad’s house.

The boys are happy, and so is Connolly. She thinks of others who are struggling to feel so connected and draws from her own well-earned wisdom.

“I want them to know that life doesn’t have to be that way. There is help.”