SEO touches almost every area of a digital team. Content writers and managers make sure the words on a page are as attractive to searchers and search engines as possible. Developers and designers ensure all elements are optimized to perform well. Analysts provide insights, and present KPIs to managers and directors. Finally, product owners and project managers ensure SEO-related tasks are being considered.

At TELUS Digital we operate a centralized, enablement-based SEO model. Basically, this means instead of having one person trying to optimize all of the content a team produces, we make sure that everyone is able to apply SEO tasks to their individual roles. SEO strategists at TELUS focus on making sure practitioners have all of the tools and support they need to be able to create the best, and most search friendly content possible. As with any large organization, there can be many different priorities requiring attention, keeping people engaged and thinking about SEO is something that needs constant work. We use a number of methods to keep all of these digital team members engaged. This includes Slack channels that give practitioners a space to communicate with subject matter experts, office hours to provide face to face time to discuss projects, and roadshows where we present to teams about how SEO works and how to build it into different roles.

In my role as an SEO strategist in the Content Centre of Excellence at TELUS Digital, I need to make sure that the Slack channels, office hours, and roadshows are actively used, booked and attended (as well as a whole bunch of other things!). The challenge is, how do you keep all of these writers, content managers, analysts, developers, designers, product owners, and project managers interested in SEO? Or, at least thinking about how the Centre of Excellence can help them with search-related tasks? Slack channels are a great way to connect with people, but simply posting SEO information or reminders to attend office hours and roadshows can get repetitive. I wanted to find a way to get more people engaging with the SEO Slack channel, increase office hours bookings, and raise awareness for SEO-related issues at the same time.

I’d been thinking about some ideas on how to increase engagement with our channels and bookings for office hours, but was not landing on anything solid. It wasn’t until I was putting together some slides to explain the difference between search engine optimization (SEO) and search engine marketing (SEM) that I found something that could work. One slide was missing a visual component, so I decided to make an infographic to represent the differences between the two disciplines. What I ended up with looked like an old timey boxing poster - with the Google Ads logo facing off against the Google Search logo. It also looked a little bit like the poster to the film Rocky 2 (a classic of the scrappy underdog movie genre). As the resemblance grew I decided to lean into it and make the infographic look as close to the original movie poster as possible and used Googlebot images to help with the search engine theme.

The first infographic, the second version which leaned further into the vintage movie poster look and the movie poster that inspired it.

The poster looked pretty good, it got the point across about how SEO differed from SEM, and it was more eye-catching than a lot of infographics. I wondered what other search-related issues and skills I could shoehorn into classic movie posters. It seemed like I may have found the answer to the question of how to keep people thinking about how we could help them with SEO tasks. A plan started to take shape, one that as a bit of a movie nerd, I was very excited about.

The idea was to make a series of movie-inspired posters and share them in appropriate Slack channels every week. Small prizes and shout-outs would be awarded for the first to guess the movie that inspired the poster and for the first to talk about a time they’d worked on the issue raised. The hope was that having a weekly competition would get practitioners engaged without feeling like they were being bombarded with information. I decided that the competition should run for three months, and at the end I would measure if there had been any improvement in engagement on our Slack channels, or an increase in office hours bookings, or (hopefully) both. I named the campaign, SEO at the Movies. Armed with this idea, a Canva account, and some rudimentary design skills, I got to work on the posters!

The first poster published was all about keywords and the different things that content practitioners needed to think about when it came to creating a keyword strategy for pages. It was well-received, with some good comments and conversations. It looked like this approach might work! 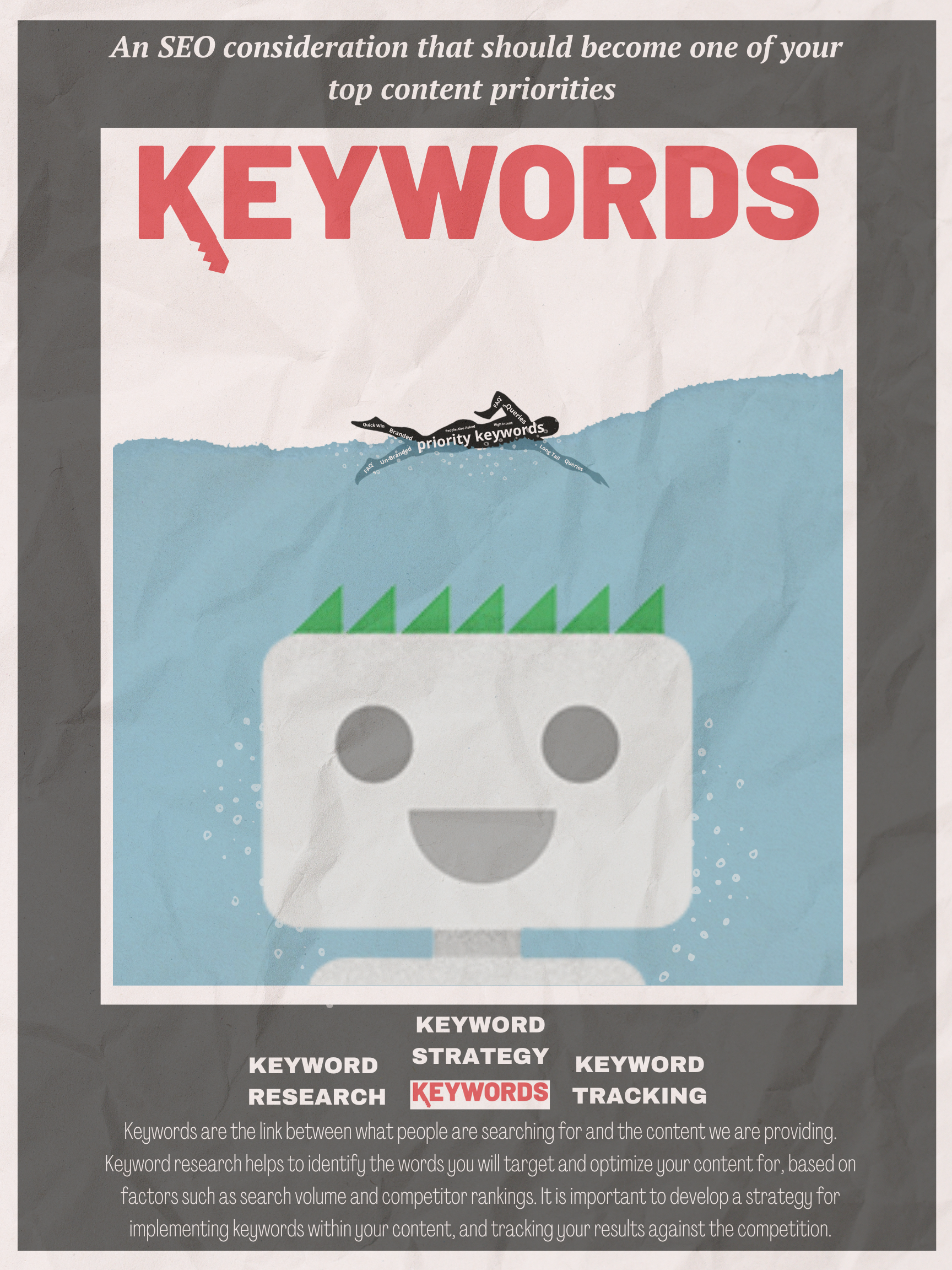 The Jaws-inspired, first SEO at the Movies poster - all about keywords!

Over the next three months I added a weekly post, with winners announced the following week. The campaign developed a loyal following - with the movie usually being guessed within a few seconds of the weekly post going live! There was some really encouraging conversation happening around the content of the posters as well, with issues like duplicate content, sitemap management, SERP appearance, crawling, and No-Indexed content being particularly well discussed. There appeared to be an increasing volume of engagement on the channel as well, people were reaching out more than they had been previously with search related questions, issues and updates. 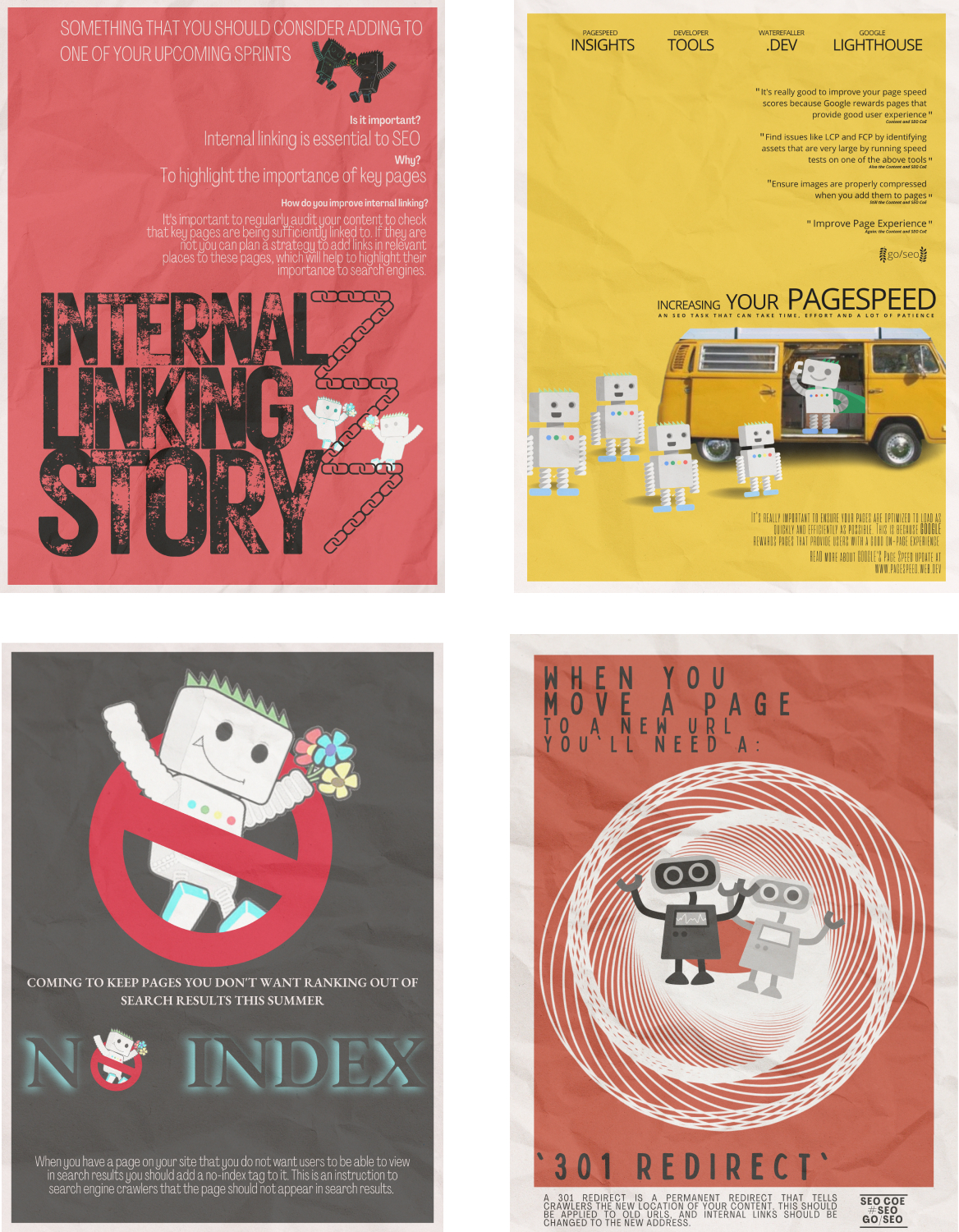 A selection of SEO at the Movies posters shared during the campaign.

Each post that was shared usually included a link to a relevant article, example or call to action to engage further with the Centre of Excellence. This was to ensure that there were some further resources available if team members wanted to dig deeper into any issues that were raised. The CTA’s also helped to remind anyone struggling with an SEO issue that we were there to help. 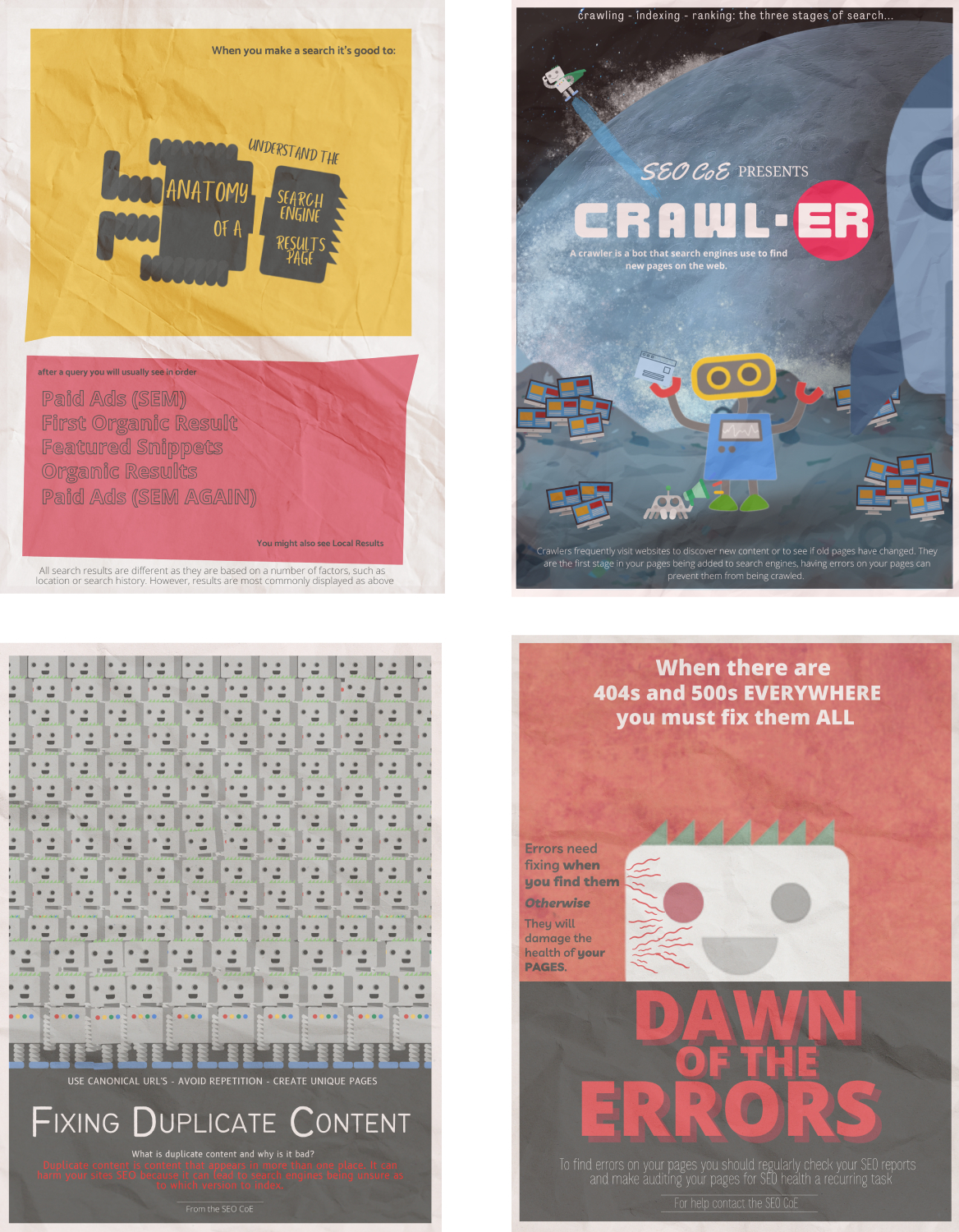 Although the concept of the campaign was a little bit ridiculous, it worked! By the time the last post went out at the end of October 2022, office hours bookings were up by just over 70%, and engagements with the Slack channel had increased by over 130%! Now that is not to say that SEO at the Movies was solely responsible for these increases, however, it is a clear contributing factor. Feedback from practitioners was positive, with the general consensus being that they were being reminded of important tasks and also learning new things about search. The SEO at the Movies campaign has given us here at the Content Centre of Excellence some great material, and has helped us to enable practitioners to think of different areas of search in a very simple way. It turns out that classic cinema and SEO is a weird, but wonderful blend. 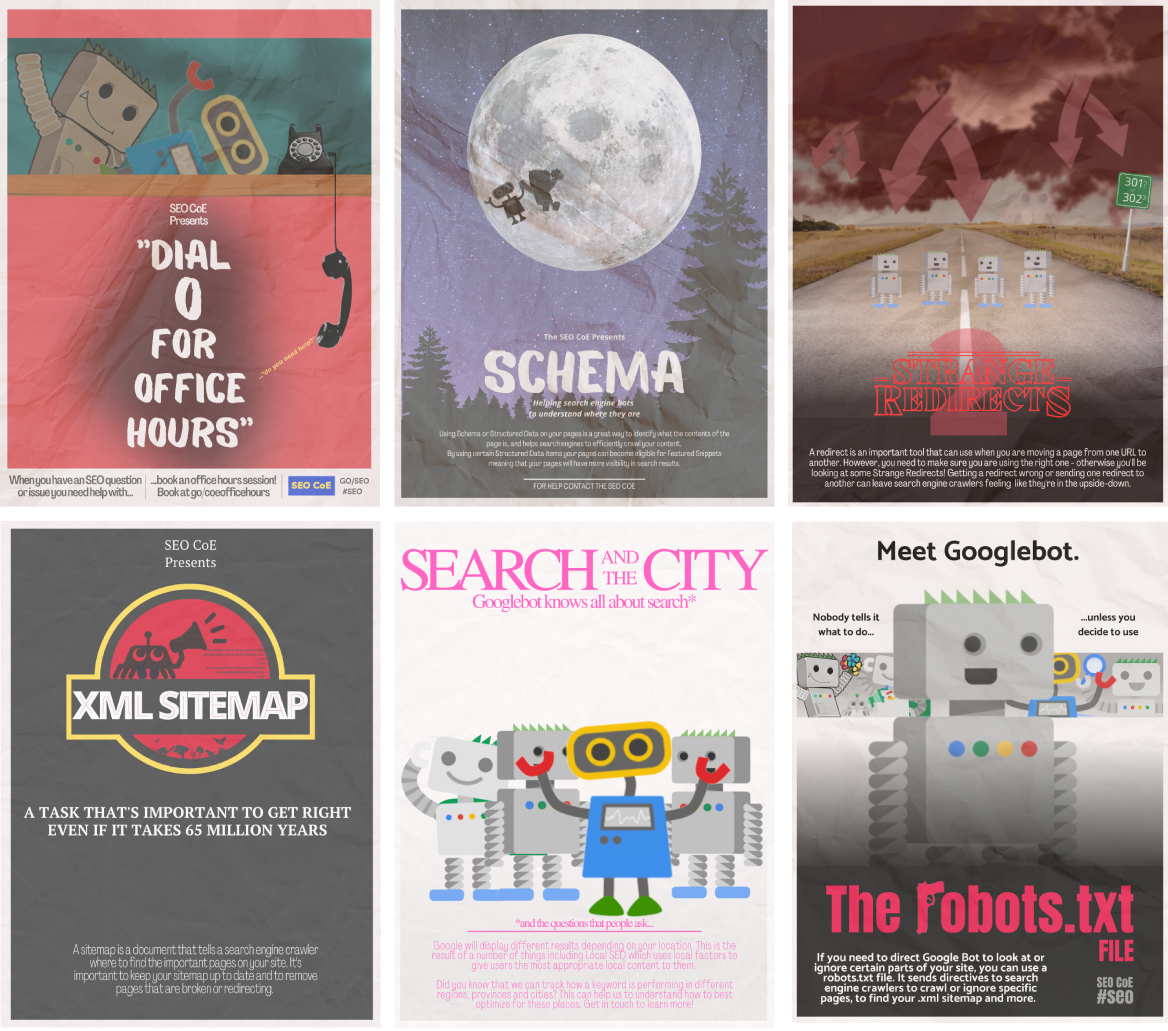 Jacob Hewlett Case
Strategy Manager
Jacob is a Strategy Manager at the Content Centre of Excellence. When he’s not helping people do their best work or solve SEO mysteries, you can find him drinking tea, enjoying the beach, or listening to music.

My journey growing my career in Data Analytics through JADE

Fostering a productive, collaborative, and creative spirit in a remote...